Findings could have implications for how nursing homes, care providers and others treat sexuality in aging populations 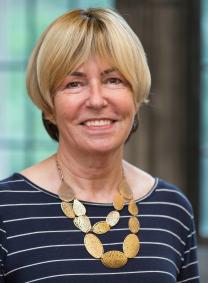 Sexual activity among older adults is notoriously overlooked. The simplest proof is the rate of sexually transmitted infections among retirement home residents: A previous study found a significant increases in STIs among adults 65 and over between 2010 and 2014 — largely the result of safe sex education focusing on young people and stigmas around discussing sexual activity with physicians.

The study, co-authored by Linda Waite, the George Herbert Mead Distinguished Service Professor in the Department of Sociology, sheds light on the importance of social relationships to support and maintain functioning as people age and lose functionality. Social relationships, Waite explains, give individuals more to draw as their memory declines.

Waite’s interest in the topic had been forming for years, having long studied the relationships between the social world and components of health to understand how each affected the other. Sexuality, she says, was always a component of this inquiry.

“We don’t know much about social relationships in cognitive decline,” Waite says. “We didn’t have a lot to go on. There wasn’t much research literature.”

The researchers held constant the characteristics that could have affected the participants’ sexual activity: physical health, marital status, education level, race, ethnicity, gender, for example. What they learned was that older adults with either mild cognitive impairment or early dementia are about as likely to be sexually active with a partner as those with normal cognitive function. Those with early dementia, however, are less likely to have masturbated when compared with adults with normal cognitive function.

The researchers say the findings have major implications for how nursing homes treat sexuality in their patients with cognitive limitations, how doctors and other care providers treat older couples in which either (or both) partner is facing some limitations, and even in how our society views sexuality in later life.

In fact, the research was prompted in part by a news story Waite read about sex in a nursing home. In 2014, a man was charged with third-degree felony sexual abuse after nursing home staff accused him of having sex with his wife, an Alzheimer’s patient, days after staff told him they believed she was mentally unable to consent to sex.

“People who care for older adults have been ignoring sexuality and failing to provide support,” Wait says. “These findings lead us to the conclusion that people who provide care to older adults should be asking about their relationships and what they would like from their relationships and helping them achieve what they would like. If that’s continued sexual activity, then whatever could be done to help achieve that is perfectly consistent in what these people have been doing before and what they can do in the face of limitation.”