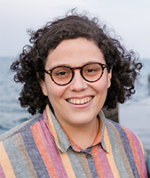 Danya Lagos graduated from the University of Chicago in 2019 with a Ph.D. in Sociology and is currently a postdoctoral fellow at the Population Research Center at the University of Texas at Austin. Lagos’s research focuses on improving the operationalization of gender in social demography to include a richer palette of dimensions. These dimensions can go beyond the simple “male or female” question common to many large-scale social surveys. Lagos’s research also explores the connection between gender identity to social and health outcomes.

Interest in Measuring Gender in Society and Applications

“Gender is ever-present in our lives, whether in taking the census, going to the doctor or booking with airlines,” Lagos explains. “We are continually presented the question ‘male or female’. But these descriptors didn’t always seem to match the people I knew.” As Lagos points out, gender is something asked about even in transactions where it doesn’t appear to be relevant. “Is it necessary to know my gender for me to board a plane?” asks Lagos.

Through her research, Lagos has also discovered larger truths about sociology. In a paper titled “Hearing Gender: Voice-Based Gender Classification Processes and Transgender Health Inequality” published in the American Sociological Review, Lagos analyzed data collected by other researchers, focusing on a perceived flaw in the gender measurement practices in the original survey. Despite the shortcomings of the data, Lagos was able to glean correlations between voice-based gender classification and self-reported health.

“Imperfect data can still be informative. Data that are collected accidentally can be even more valuable than those that are collected purposefully,” says Lagos. She advises young scholars that even if their research seems to hit some roadblocks, there can be opportunities to look more closely at mistakes and shortcomings in data collection, and shift the focus of the research to analyzing what the presence of these flaws can tell us about science and the social world.

Research on ways to measure LGBTQ groups isn’t just helpful for sociological research; industry has also been receptive. Lagos is scheduled to speak at the Harvard Business School’s Gender & Work Symposium in 2021. “I think companies understand that it’s necessary for everyone to catch up,” says Lagos.

Lagos holds a bachelors from the College, in Philosophy, as well as her graduate degree from the Division of the Social Sciences. When asked about her initial reasons for going to the University of Chicago, she says, “I was attracted to the idea of a core curriculum. I didn’t know what I wanted to do, so I was looking to get a good foundation in modern thought.”

Lagos started studying social thought and stoicism and was encouraged to apply these frameworks to understand society empirically. UChicago’s interdisciplinary spirit allowed her to bring her undergraduate work in philosophy to her current research in sociology. A variety of classes informed Lagos’s research, from social theory to biology courses.

Lagos’s time at the University of Chicago bolstered her interest in studying gender. She cites Professor Kristen Schilt’s course Researching Gender & Sexuality as a catalyst for her research interest. “I would not be here today without Professor Schilt’s course,” says Lagos. Besides better understanding gender in society, Professor Jenny Trinitapoli’s Applied Regression course taught the “nuts and bolts of building a research paper,” says Lagos.

Beyond the Researching Gender & Sexuality course, Professor Kristen Schilt has seen Lagos grow in academia. “I had the rare opportunity to work with Danya as both an undergraduate and a graduate student”, says Schilt. “It has been such a pleasure to see how Danya's grounding in the UChicago core curriculum and philosophy has shaped this cutting edge methodological work on how social scientists measure gender identity - and how we might do this in more inclusive ways. Danya is such a creative thinker and this work is already pushing sociology in new directions”.

A Bright Future of Mentoring Others

Lagos will begin an assistant professorship at the University of California, Berkeley’s Sociology Department in July. “It’s nice to be going back home. My mom is a public school teacher in California, so I’m excited to be working in education in the area,” says Lagos. She will collaborate with other researchers at Berkeley conducting groundbreaking research in the methodology of measuring race and ethnicity. Lagos looks forward to the opportunity to continue to mentor students looking to study gender and sexuality.

When it comes to designing social surveys, Lagos believes openness to the categorization of gender and sexuality is critical. “We want to measure all aspects of society. Gender can be very important to people. There is a growing population out there who looks at current descriptors of gender and says, ‘That doesn’t describe me,’” explains Lagos.

Changing our perspective on measuring gender doesn’t just result in more accurate data - it helps underrepresented LGBTQ groups be seen. “Confining LGBTQ individuals to certain options not fitting their identity can be alienating,” Lagos points out. “These are already marginalized groups that we don’t want to further marginalize through improper methodology.”